The past year – despite the state we are in because of the pandemic – we feel very lucky to be able to continue to have performances, arts events, and entertainment events in Aotearoa. Come January + February this year, our events division was in production for 4 large-scale events, and some smaller ones. This included working with Humans Agency’s founder & Creative Consultant, Shona McCullagh – who is now the artistic director of Auckland Art Festival. We also got to play at Splore festival who, again, had to shuffle things around because of Covid. Our people also got to be part of the vibrancy for America’s Cup, and Amber Liberté designed, produced, and managed a brand new festival we tested out this year, thanks to Albert-Eden Local Board funding. From February – March, we had a pretty wild time resulting in an office PACKED with costumes and props, lots of performers making a little extra pocket, and a manic Amber – who’d become somewhat of a comic headless chicken (but revelling in the thrill of it!). As we reflect, we take our hats off to all of the artists, performers, creative, and events people. Everyone’s done an incredible job, and we’re in the very lucky position of being able to continue bringing events to the people. 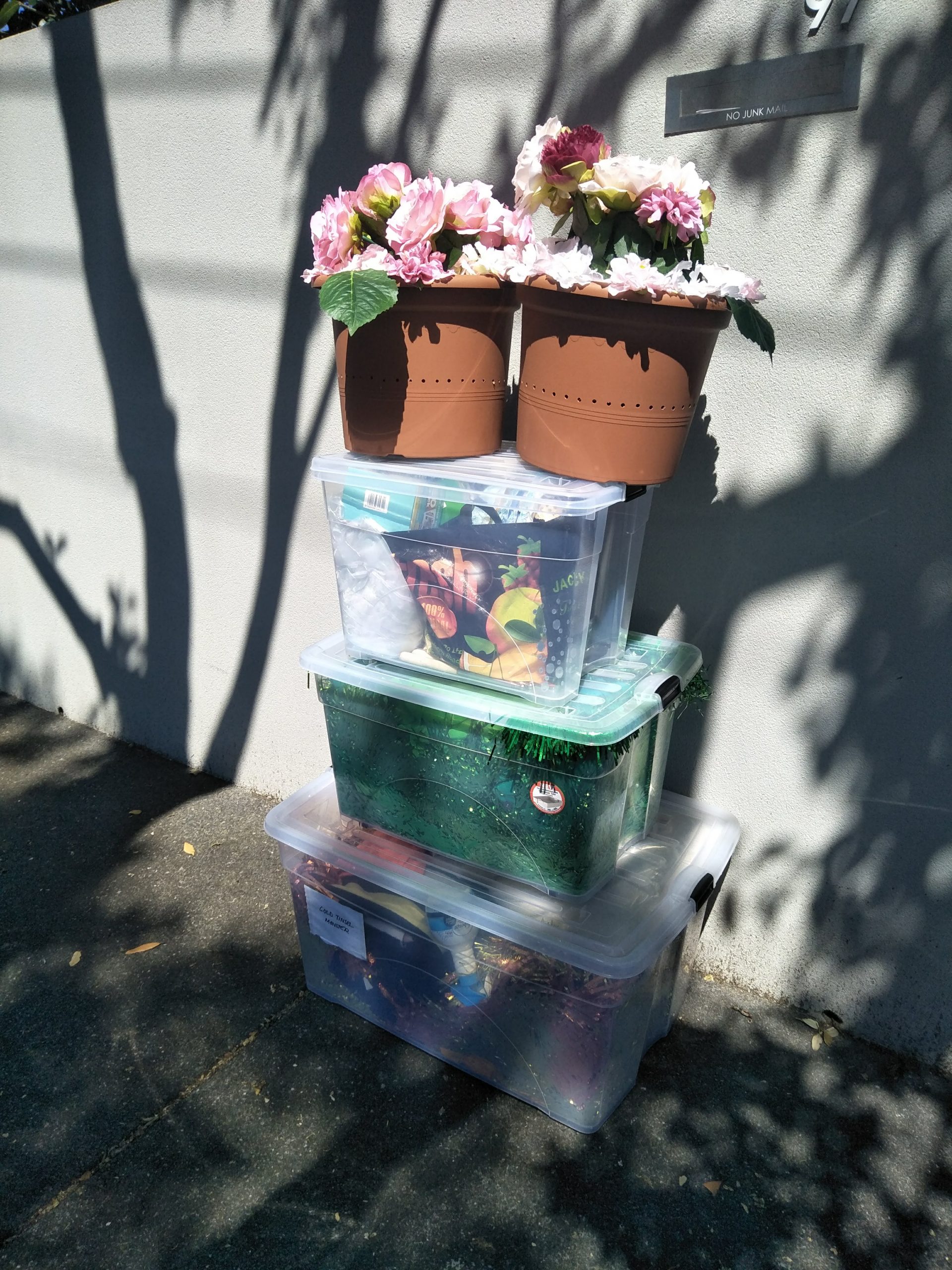 (Some packed gear for a month of madness)

AUCKLAND ARTS FESTIVAL – ACTS OF LOVE
The team at AAF tackled some very difficult circumstances due to lockdowns  and still managed to put on an incredible festival – with mostly kiwi-artists. One addition to the festival was the “Acts of Love” activations. These were various roaming performances and installations intended to entertain, amuse and bring people together. Human Agency’s limpy-limbed Floomps were involved and, in collaboration with Auckland Arts Festival, we also had The Essential Twerkers roaming about Queen Street, Aotea Square, and Freyberg Square. 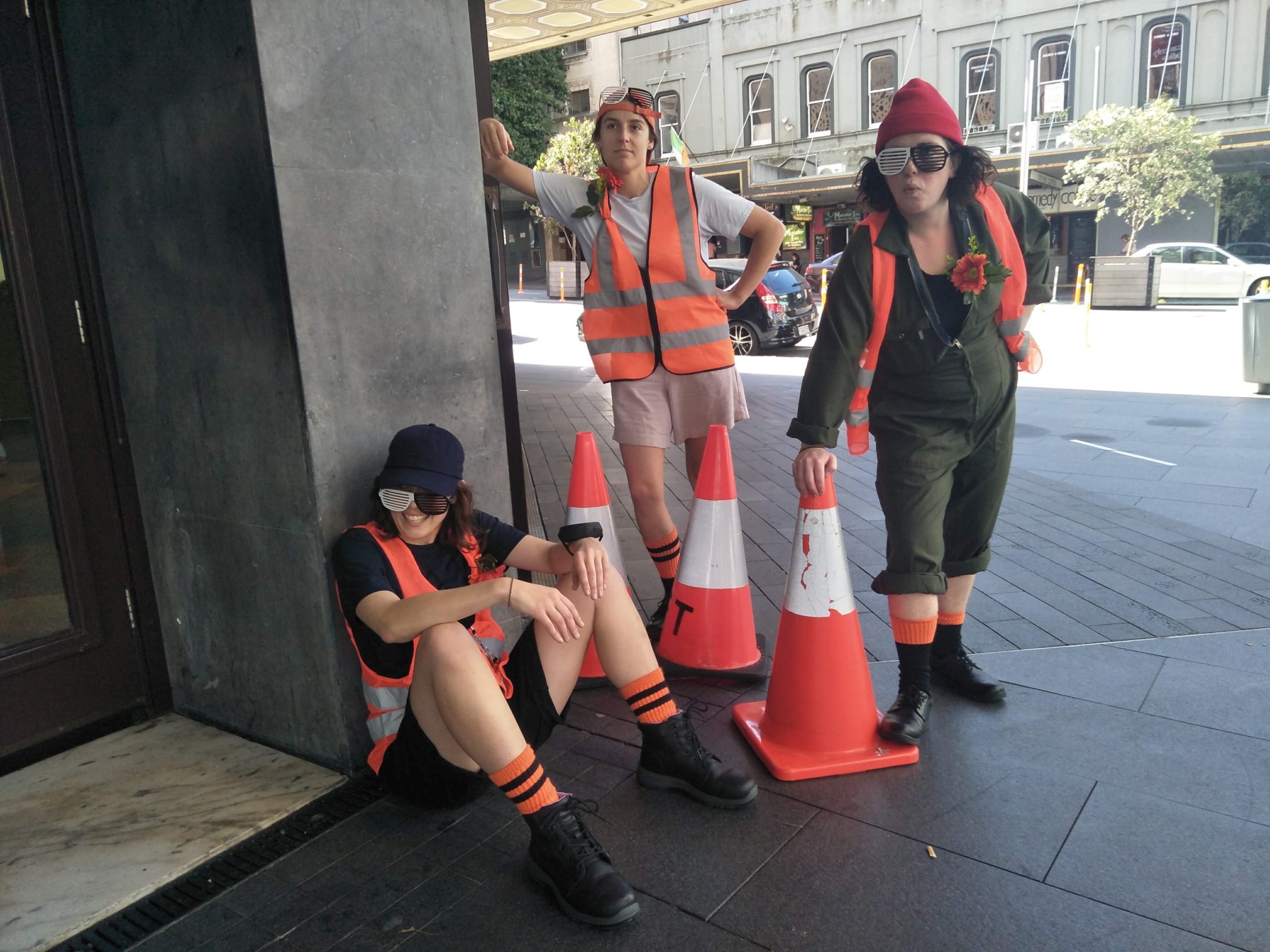 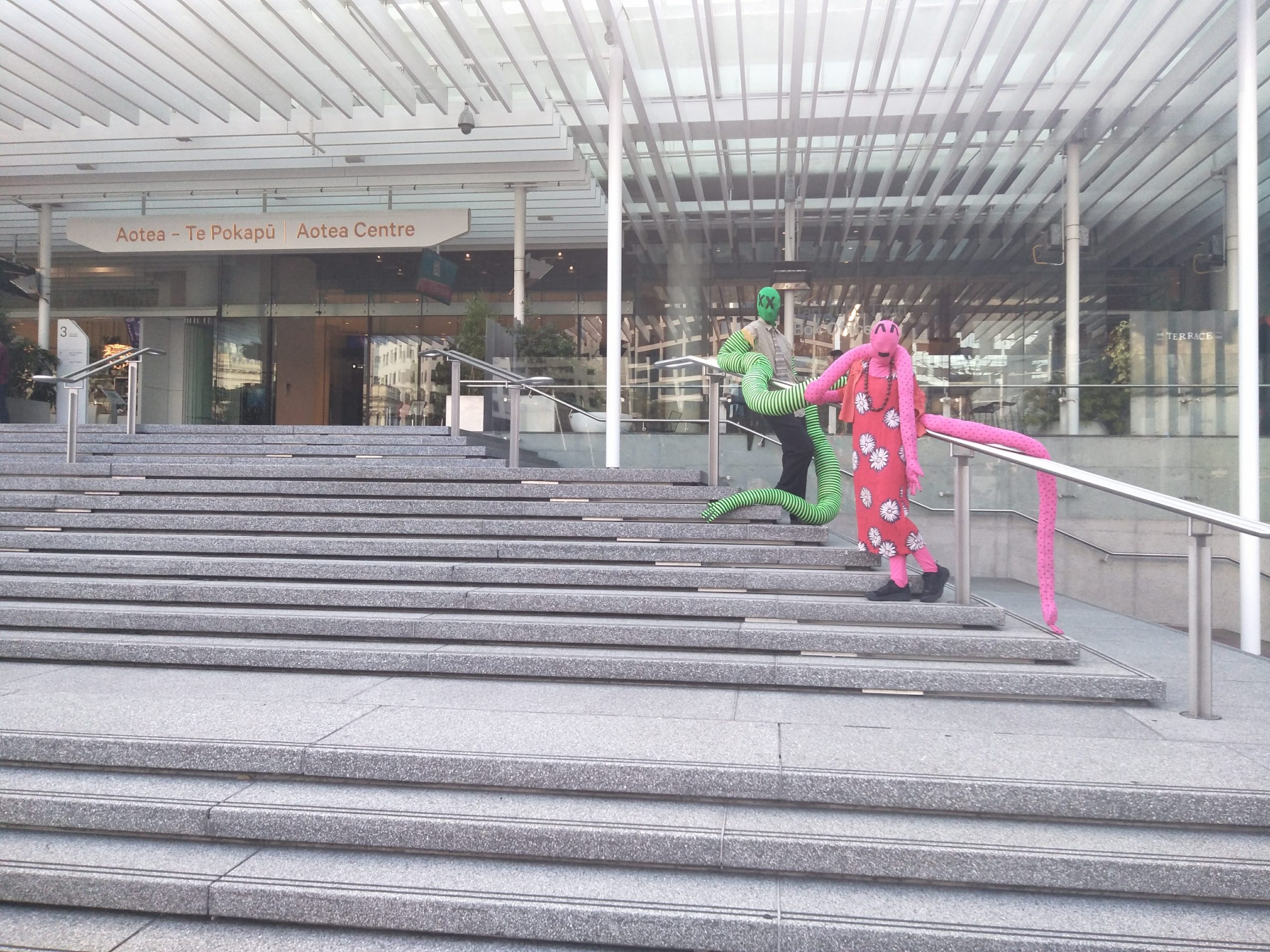 PRADA 36TH AMERICA’S CUP
Needing a bit of vibrancy and fun, America’s Cup (via Auckland Unlimited) booked in our infamous Tinsel Monsters, and our Salty Scootin’ Sea Sailors made a premiere appearance – taking snaps on polaroids for keepsake memories. Throughout the Yacht Racing events, we were yoyo’ing in and out of alert-levels. Our Live Events Manager was getting bookings with only 8-12 hours notice, and had to pull together teams of 8 people. No easy feat. but it was pulled off with exceptional speed, happy performers, and a lot of frantic (but fun) scrambling. 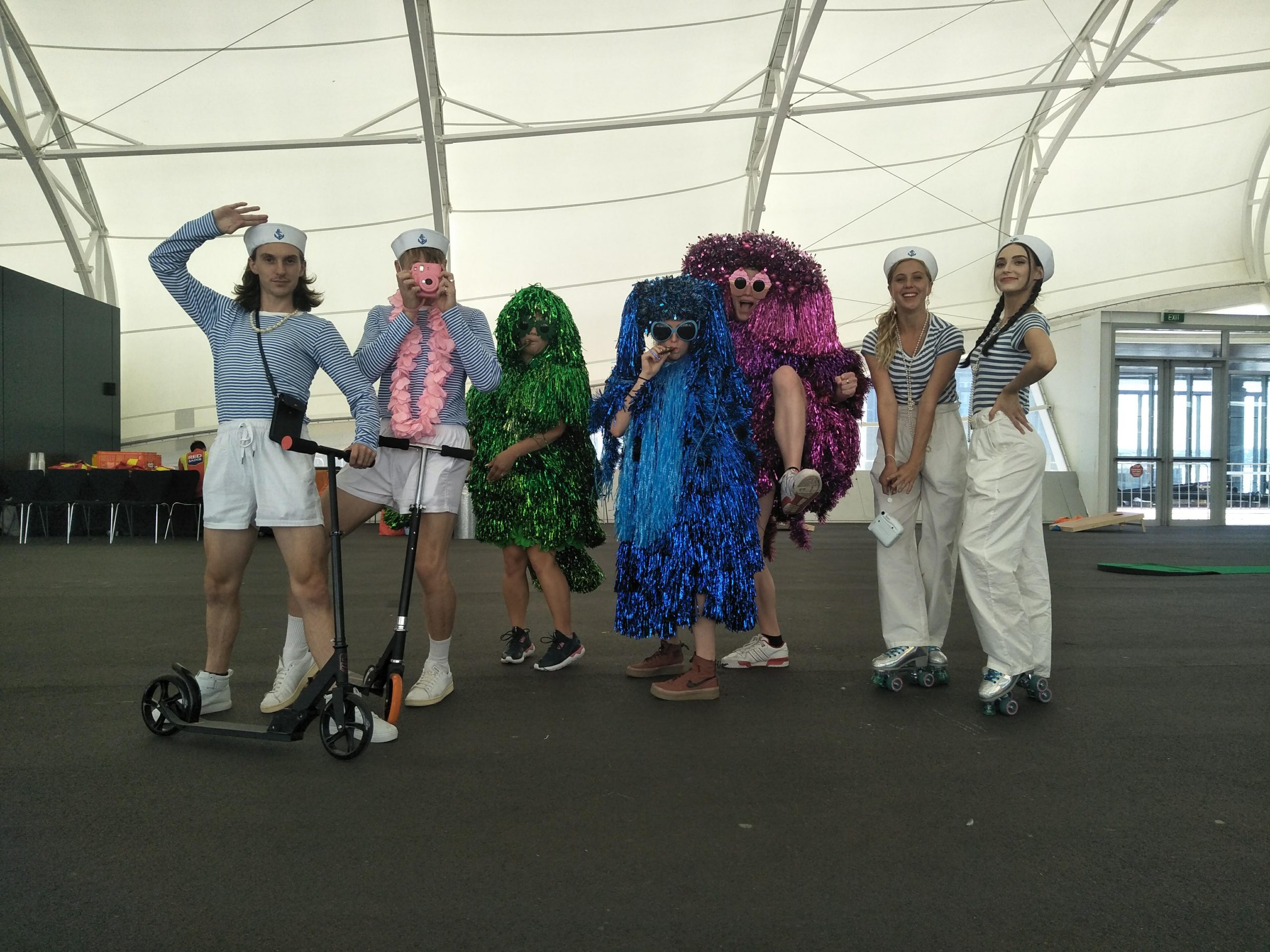 PERFORMANCE TOWN
Performance Town was a mini pop-up festival created by Live Events creative + manager, Amber Liberté. After being awarded a grant from Albert-Eden Arts to put on an event that would support a community within the Albert-Eden area, Amber wanted to support students from Unitec’s performing and screen arts department to learn about the practical process and mentorship in their pre-production, production, and post-production – as well as overseeing creative visions being strengthened and met. Due to Covid, this plan was unable to follow-through, so Amber re-strategised. During the Feb/March lockdown this year (2021), she went back to the drawing board, and realised lots of artists had lost work in the week-long level 3 lockdown, so prioritised giving them work. The kaupapa of the project was to make arts accessible for audiences. This was a free event, located in the Sandringham Reserve on the gorgeous Easter Weekend in April! Thanks to good strategising (and a lot of sun-dances), we managed to attract over 100+ people walking by giving them a feast for their eyes, soul, and the community. This event employed 35 artists, hosted 12 different activations, and packed a hearty arty punch over 90 minutes of magical installation + entertainment. 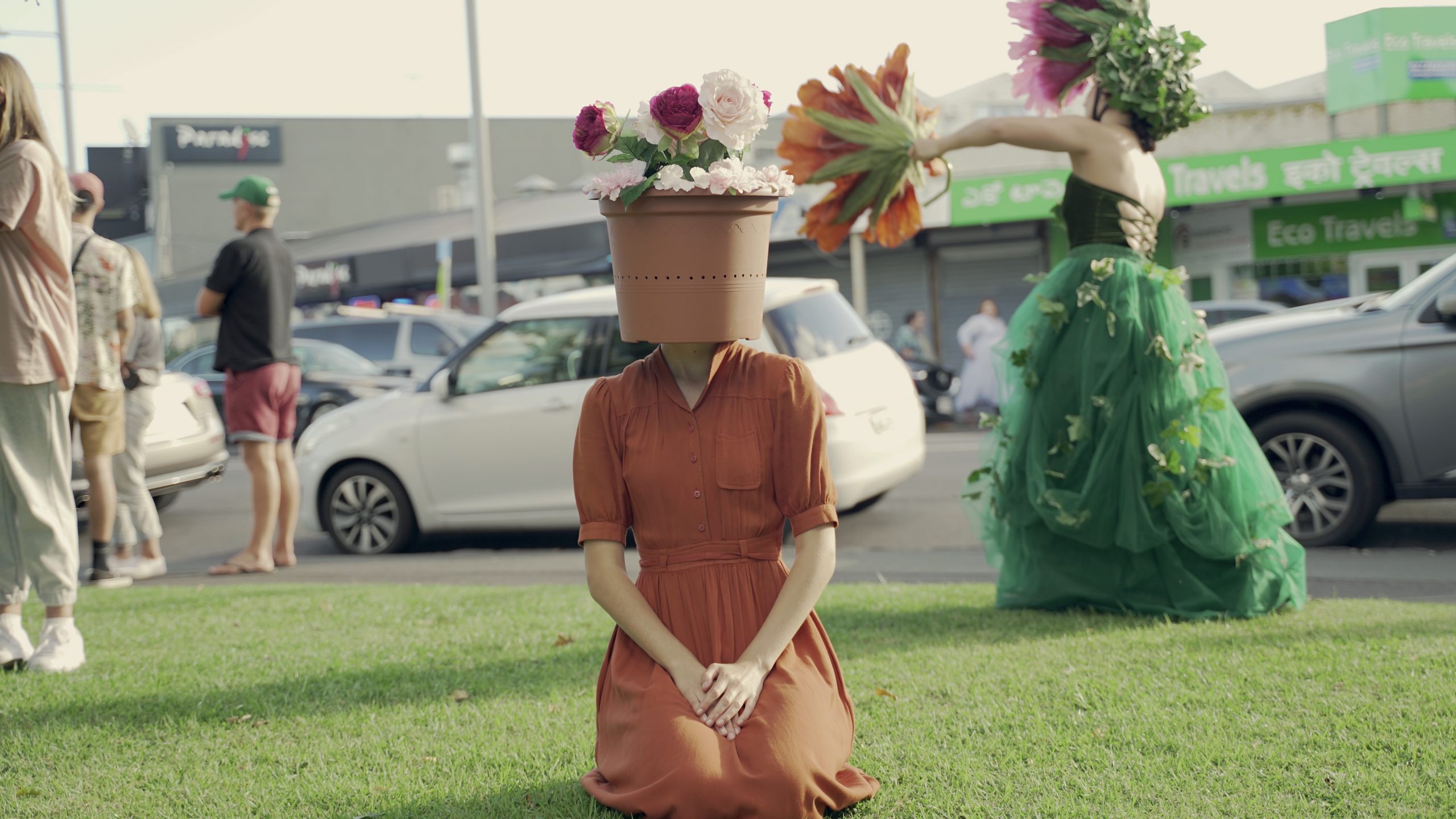 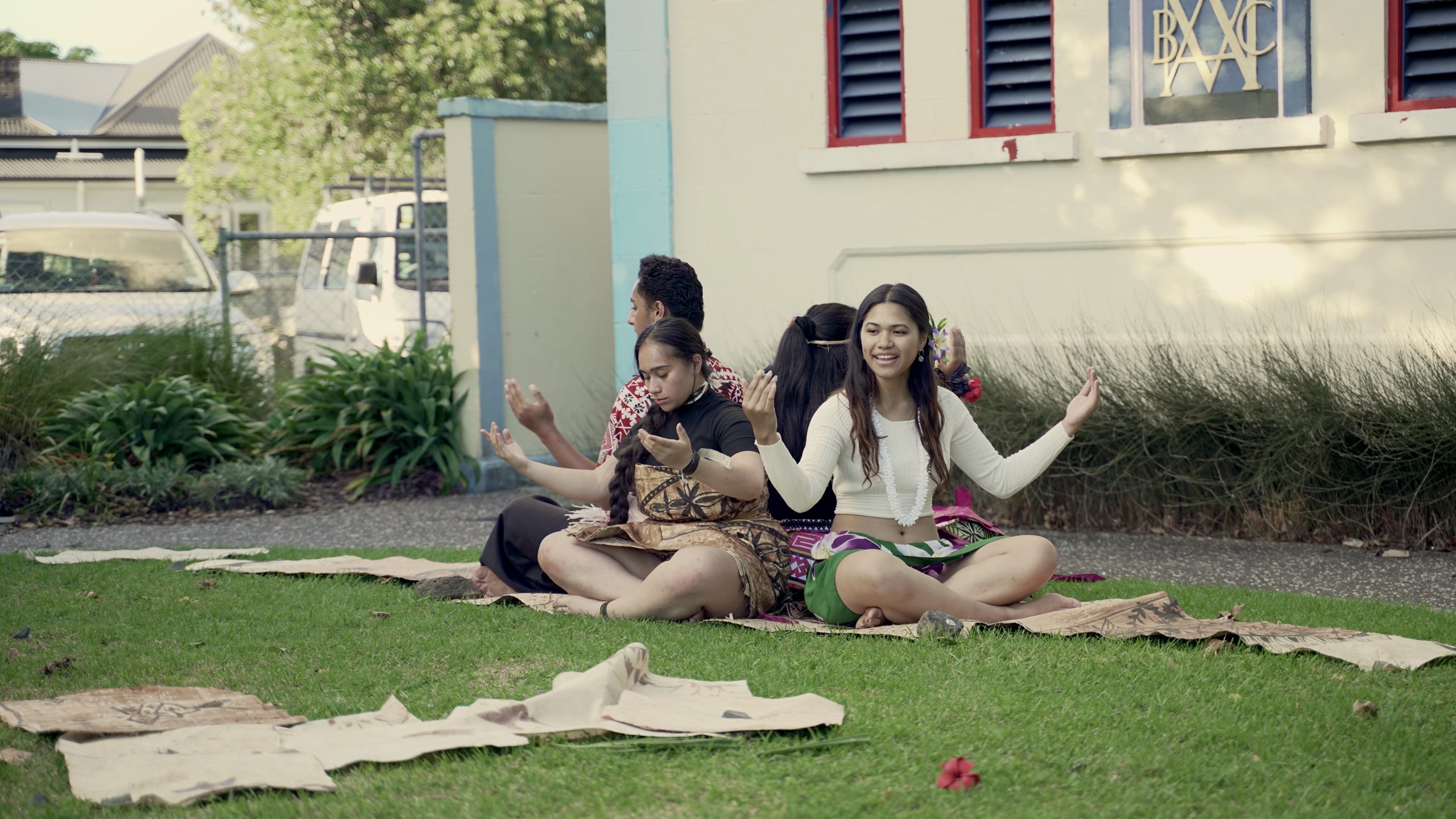 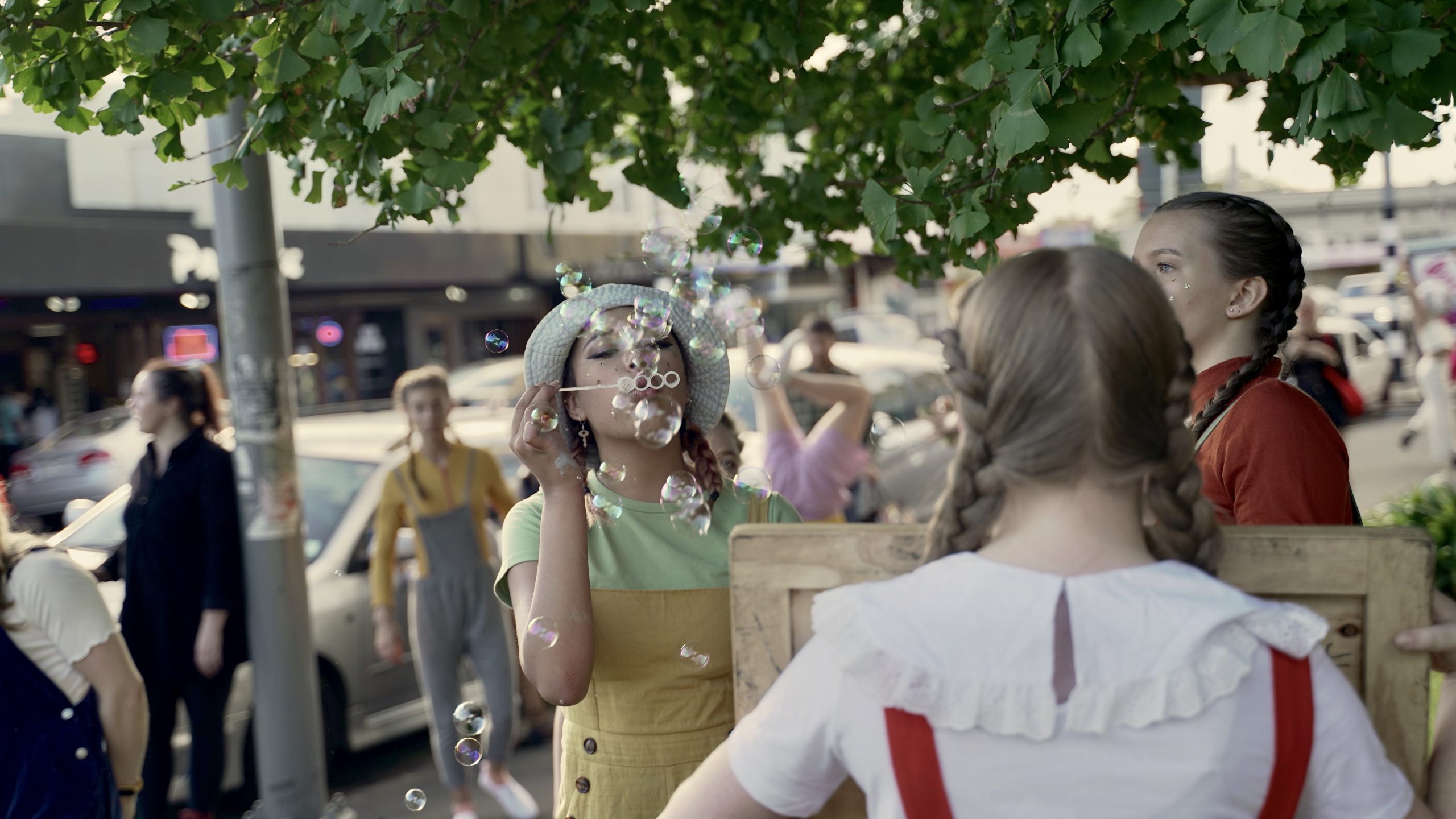 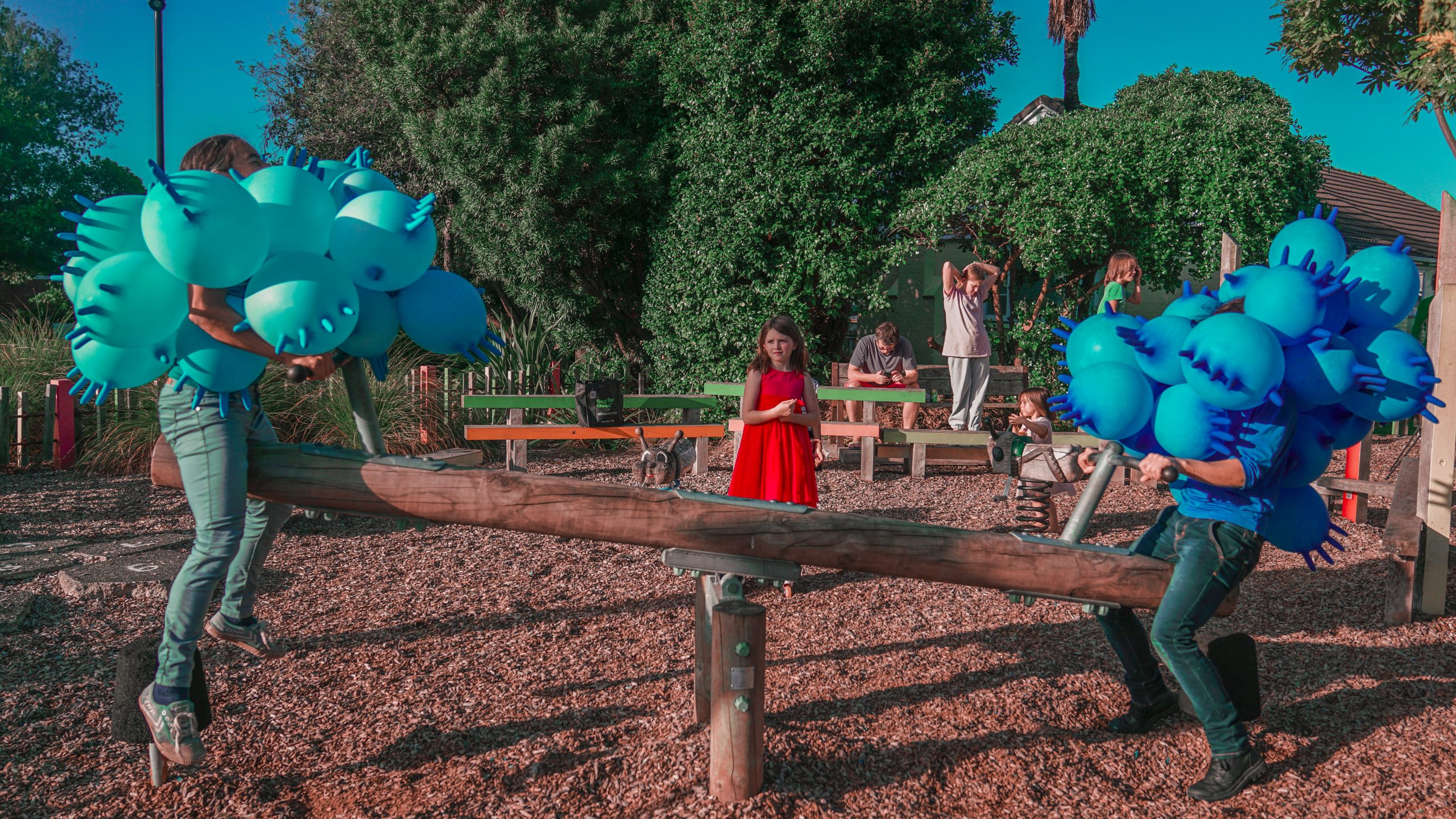 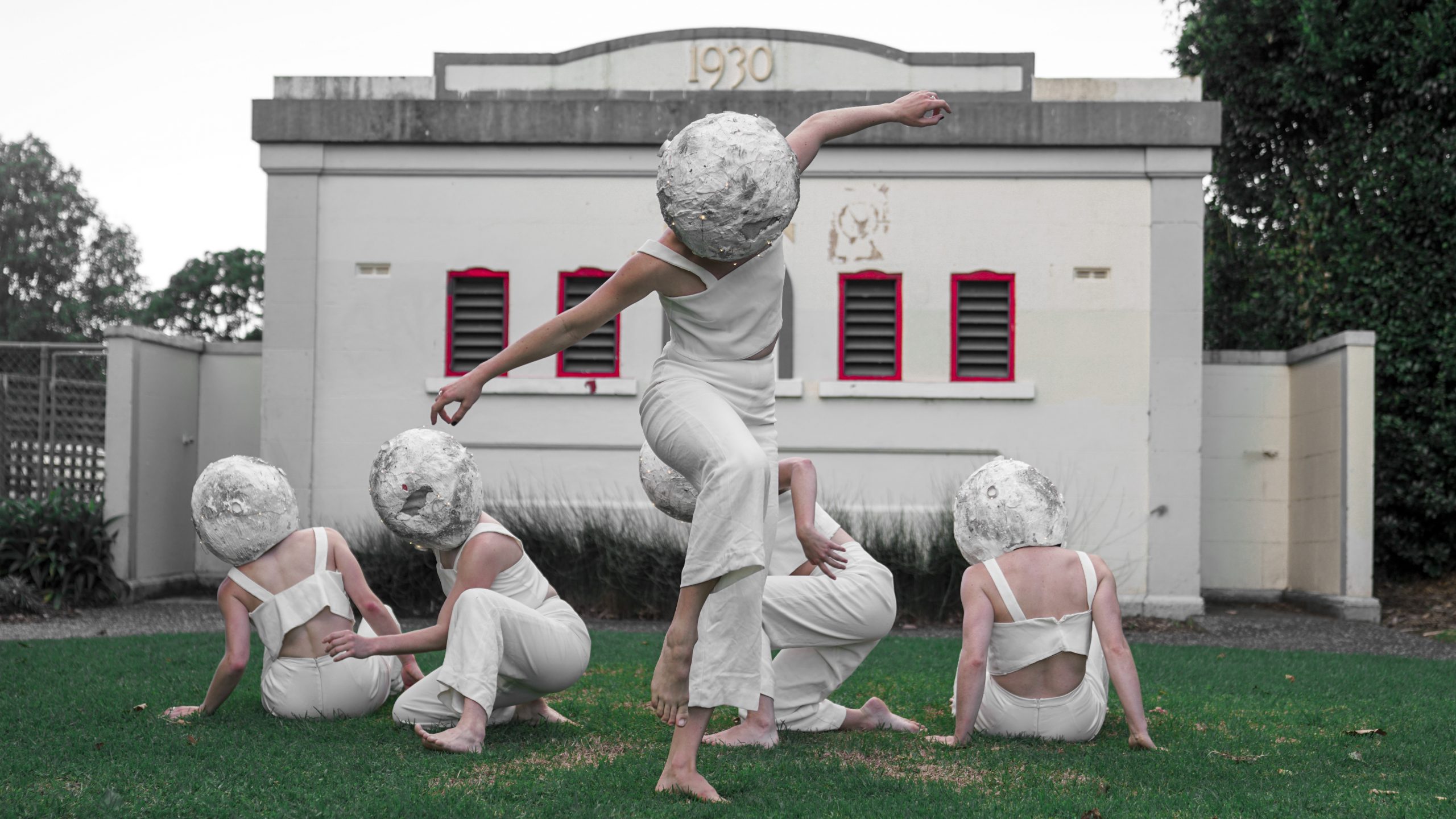 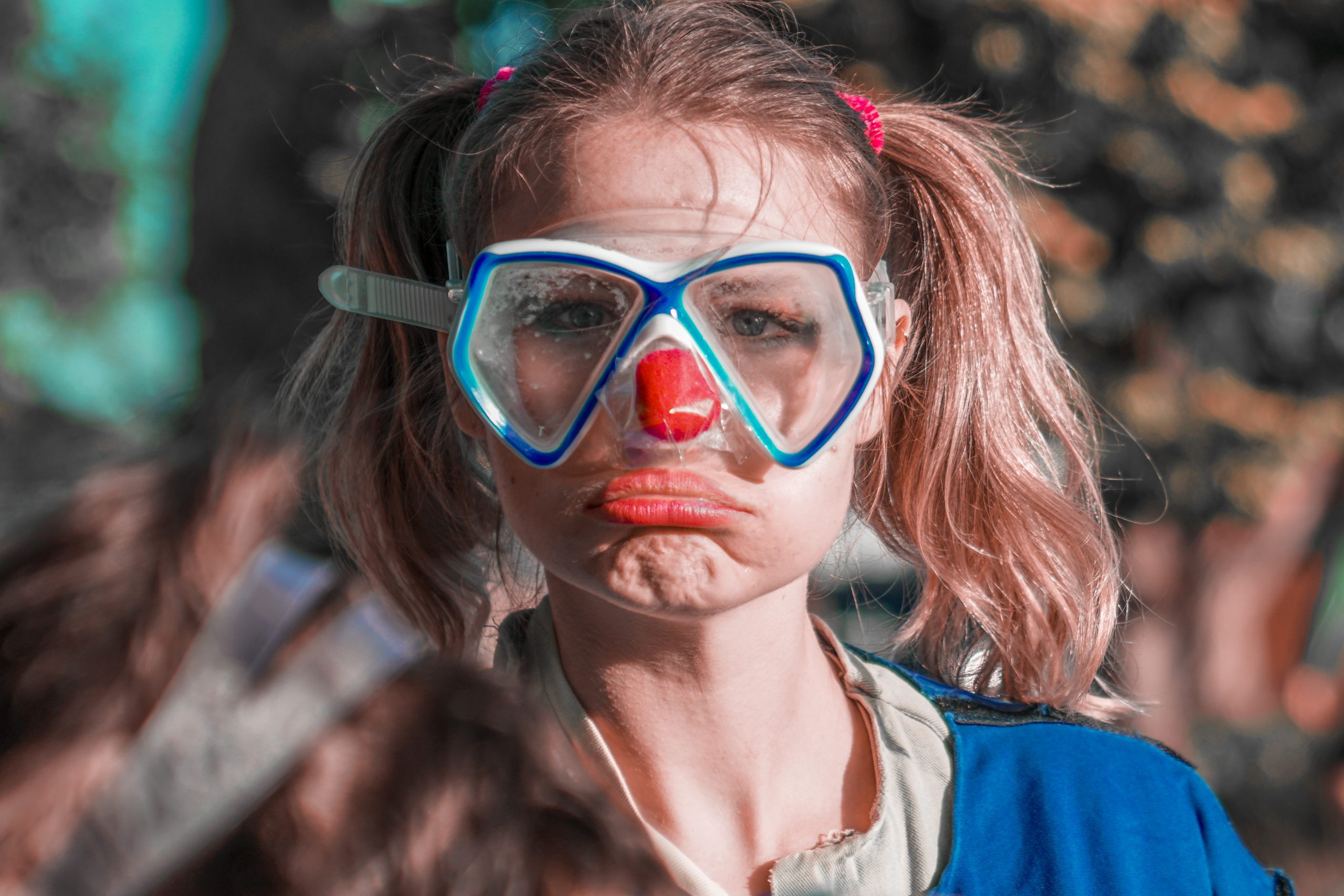 SPLORE
We were lucky enough to have 5 activations at Splore! Bubble Wishes, Litter Bugs, The Floomps, Red, and Minema. Our Bubble Wishes brought delight to the kids, the Litter Bugs were a reminder of the importance of looking after the environment (and well on topic with Splore’s kaupapa!). Our Floomps were eerily and joyfully received. Red was an activation with goggles, red clothing, aimless wondering and a vampiric like ritual… unfortunately inhibited by a crazed wind that came through. The one performance of it was received well, but sadly our red ritual cloth went missing while drying it out (Splore attendees wanting to be superheroes maybe?). Finally, the Minema was a hit. It was absolute CHAOS, but people couldn’t get enough. So much so that there’s talk of it being developed into a tourable work for future festivals.. stay tuned! 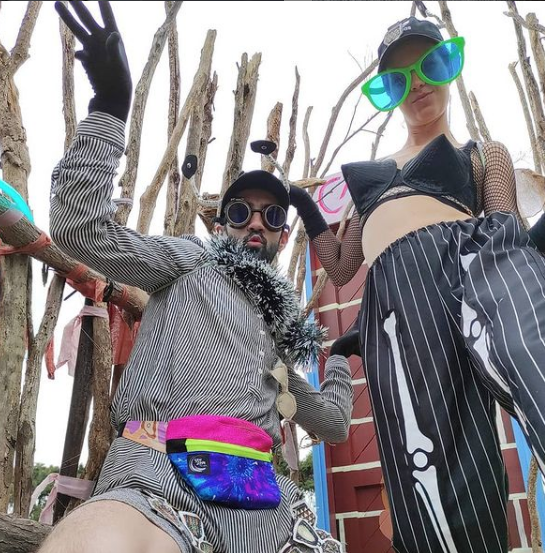 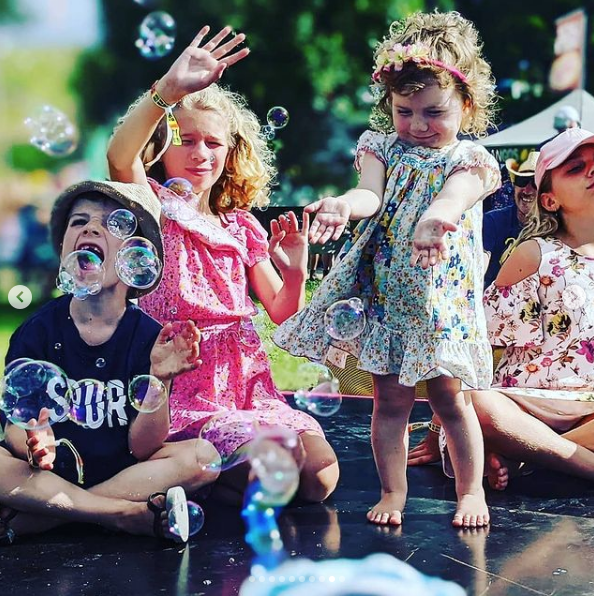 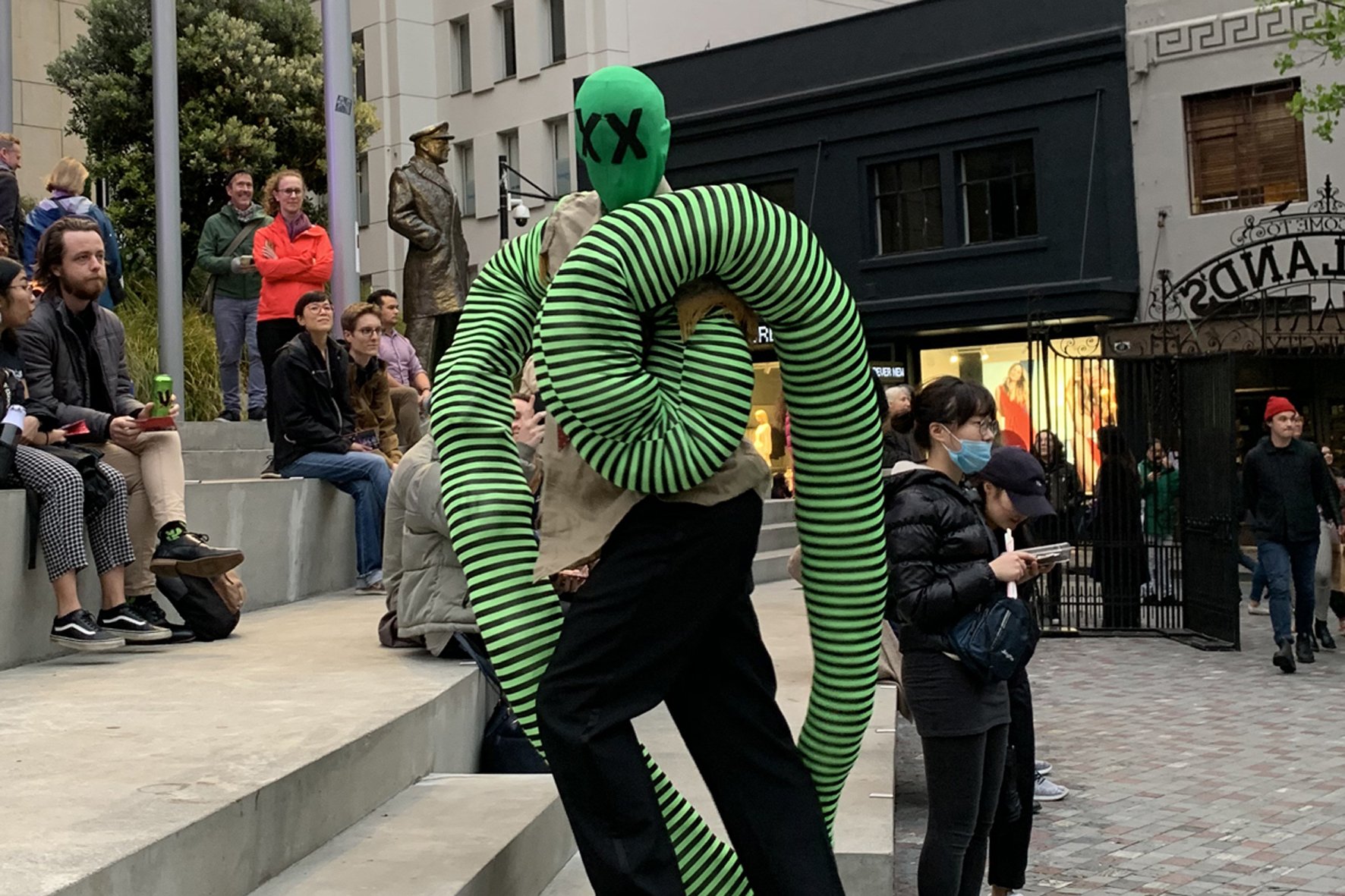 (Left: Adam Naughton + Neža Jamnikar as Litter Bugs. Middle: Kids enjoying bubbles from our Bubble Wish activation. Right: A Floomp hanging out in Freyberg Square (not at Splore, but we didn’t get any Floomp images… sad face)

FLOWER CARPET SANDRINGHAM
Finally, we had our gorgeous Flower people out to play for Sandringham’s annual flower carpet! 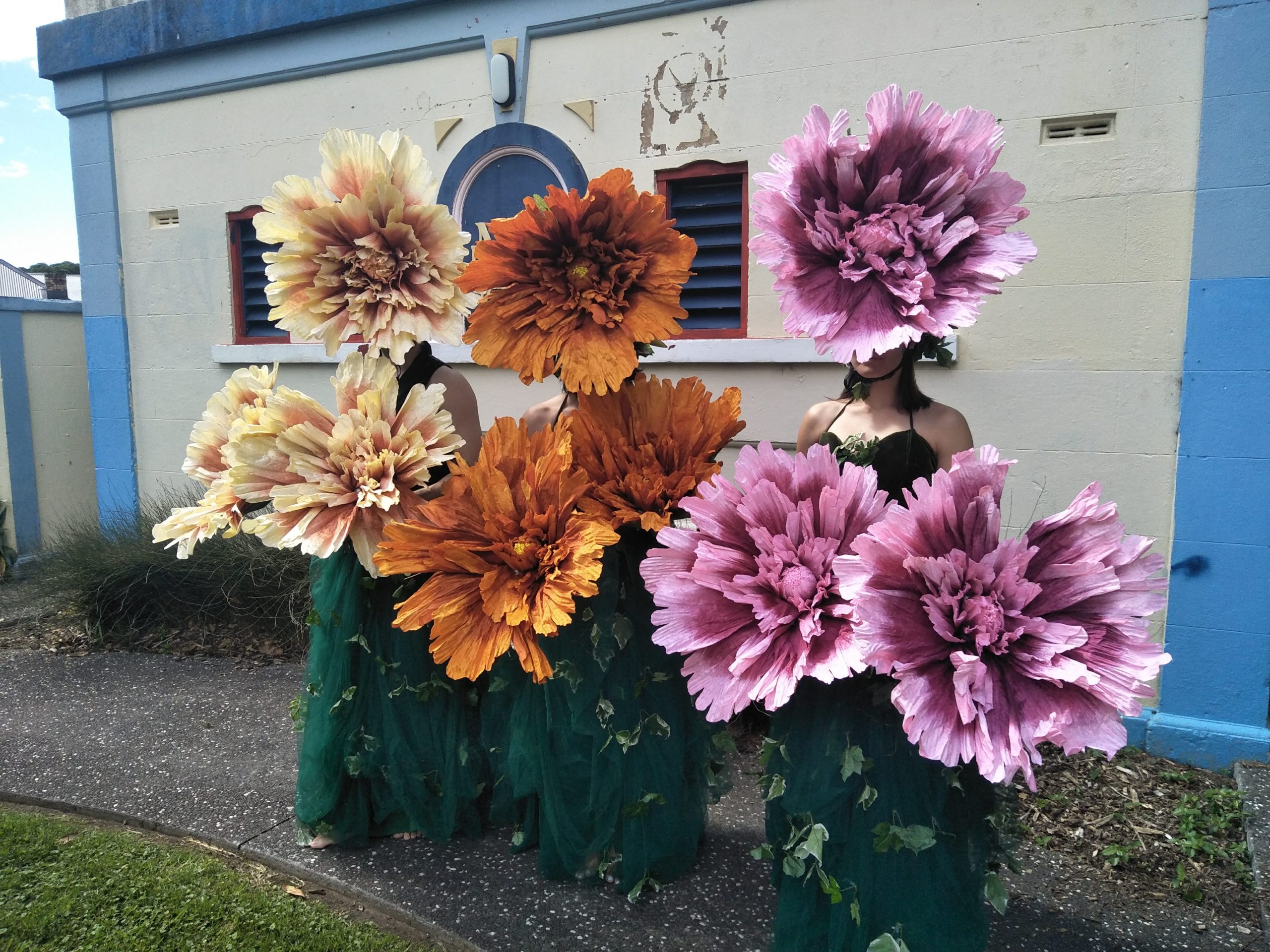