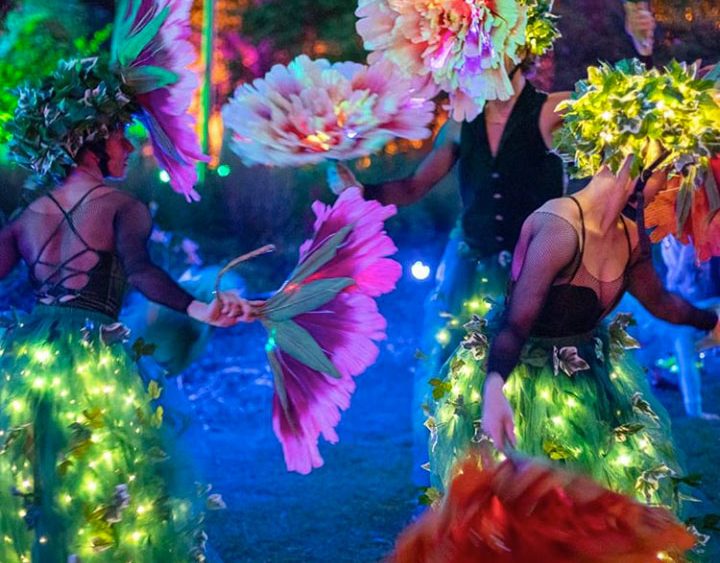 Winter 2019 provided a whole load of exciting events to look forward to pitching for, inclusive of Highlights Carnival of Lights in Lower Hutt thanks to Colossal, an incredible group of performers & event creatives, and Lower Hutt City Council. Our glorious ex-live events manager, consultant, dancer, actor, choreographer-extraordinaire, Lara Liew, put forward a pitch based on the idea of lights inside giant flowers with dancers wearing them, as well as a steampunk time traveller. Wild. Fantastical. Whack. Both were accepted, and thus began creative logistics for our new, much-loved Night-Garden concept.

Here at Human, our goal is to literally try to make ANYTHING come to fruition. Regardless of how ridiculous or impossible it might seem, we’ve got that classic kiwi determination/can-do attitude, and so between Lara and myself we made a dream come to life. After umm-ing and ahhh-ing, weighing up cost & time & logistics, we found various elements from different sources  which we pulled together to make the final costumes. The first, and main thing was the giant flowers, from a very creative maker overseas. We used them to make into a headpiece, as well as the performers holding two – one in each hand- so their face would be covered and they’d look like a literal giant flower. Adding to that was the tulle skirts – the leotards, a velveteen jacket, and a LOT of lights – seen as it was a light festival for night-time entertainment. The wonderful thing about being in live events is seeing things come together – usually just in the nick of time – and always having to think on our feet.

We try to be as innovative and hands-on with our making as possible, but all processes definitely result in a few swear words and calls to random people asking for their expertise on how to fix things. That or, we remember back to a time where we’ve had similar roadblocks. Between us, we always manage to pull something pretty extraordinary (and innovative) together. So, after hours of threading bud-lights around the tulle, burning fingers with hot-glue, and testing light logic again and again to make the headpieces glow, we had a near-final product!

Simultaneous to making the costumes, we also had performers to be brought up to speed of how the costumes & flower characters would be most effective. Luckily we have a wealth of professional and talented dancers on our books, so we pulled from our pool in Wellington, and let them know the down-low on how-to as we were making the costumes. It wasn’t until we actually arrived in WLG that the costumes etc. could be tested and everything could be finalised. Our dancers: Joanna Hobern, Oliver Carruthers, and Veronica Butturini took to them like a fish to water, and each added their own nuance to make the costumes come to life.

Our audience response was a mixture of fascination and awe – the young children particularly like the magic/fantasy the performers/costumes brought to Riddiford gardens, and many of them wanted to ‘shake’ hands with the flowers. Veronica found a character which was very friendly and cheeky, Ollie’s was a delightful dancing flower (which the kids LOVED joining in with), while Joanne was very much a resemblance of the flowers from In The Night Garden.

Overall, our experience of these new additions to our HA collection was incredible. From concept to research to sourcing to creation to assembly and finally, to seeing them come to life at a real event.